‘The demand is certainly there’: Florida Real Estate Developer on business since reopening 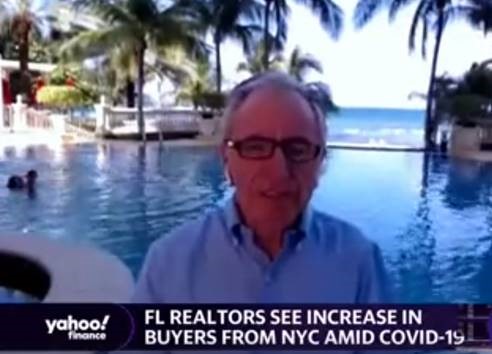 Jules Trump, The Trump Group Co-Founder, joined The Final Round to discuss the state of the luxury real estate industry and how business has been since Florida’s reopening.

JEN ROGERS: So the number of sales contracts for Manhattan co-ops, they fell 80% last month, compared with a year earlier. This is according to a report from Miller Samuel and Douglas Elliman. But let’s contrast that with what is going on in Southern Florida, which saw a big bump in May, especially for standalone homes. I want to bring in Jules Trump. He’s a real estate developer near Miami. He is the Trump Group co-founder. And Jules, before you go, I’m sure you’re used to this by now, but you are not related to President Trump.

JEN ROGERS: You’re your own Trump.

JEN ROGERS: So we got that out of the way.

JEN ROGERS: Tell me what you’re seeing. You have– you’re obviously in a beautiful spot. You deal in the luxury market.

JULES TRUMP: Right, we’re in the top end of the luxury market in Miami.

JEN ROGERS: How is it? How is it at the top end with that– at those rarefied prices? Is anyone buying right now?

JULES TRUMP: Well, look, we recently started our– we’re part of Acqualina. Acqualina was– we started with the hotel. We’ve since– and then added condos and added a second condo building. And now, we embarked on a 245-unit additional condo, two towers, called The Estates at Acqualina. And at this point, our first tower is pretty much sold out.

In January, we launched– we started building and launched sales of our second tower, which consists of 94 residences. They’re all large, all corner residences. And we’re about 20% sold in that in the two months– January, February. So we experienced strong demand.

When the lockdown hit, nothing, I mean, it went, you know, really cold, and understandably because what we sell here is lifestyle. And– because it’s a combined hotel, resort, resort-style living, and– but many, many primary home owners.

JULES TRUMP: So you know, it went completely dead at that point. We reopened eight– nine days ago and quite successfully. We have several contracts that we’re now negotiating. So you know, we feel that overall, the– you know, the demand is certainly there. I heard a little earlier Myles making some remark about how many people are leaving the Northeast. And you know, obviously, Florida is the biggest beneficiary of that.

MYLES UDLAND: Yeah. And you know, Jules, you mentioned the lifestyle down there where it’s people. It’s mingling. You want to be part of the community. Is that– how do you see that changing over, you know, not just the next six months? Does this change how people think about the Acqualina properties longer term?

JULES TRUMP: You know, I don’t think so. I mean, we purposely– I think we’re fortunate in that we built out in a concept with lots of space. We bought 12 acres here. We got 1,200 feet on the beach. And you know, it affords us tremendous flexibility. So we haven’t packed the property. We could have done twice as much development on this property, and we didn’t.

We believe in larger residences and large amounts of space for the residents. So we’re not experiencing that. Also, there are lots of spaces that people can be private. So you know, you take even a place like– I’m sitting at the pool. And as you can see, there’s not a lot of people around. There’s, I guess, a couple of families, but that’s it.

JEN ROGERS: Are you having to change any of your layouts, or do you think that you will be in the future? We were just talking with the co-founder of Zillow, and he was talking about people wanting rooms where they can take phone calls from. People–

JEN ROGERS: –want to have more home offices. People want to have places for their kids to go to school. So will you be adapting your layouts to accommodate this?

JULES TRUMP: Jen, that’s a great question. Look, we– fortunately, in our newest tower, we built it all four and five-bedroom residences. So now, what we’re doing is we’re showing examples of how you can build it out as an office, and we’re actually doing it for the buyer. We’ll build one of the rooms out as an office. And you know, we hadn’t thought in terms of a home schooling office, but obviously, that can be adapted. And you know, we focus heavily on families, so that’s probably an idea that we need to follow up on.

Look, we’re learning as we go because it’s a different world. I mean, we did surveys, and we found– I mean, there were four basic things that seem to be apparent. One is people really are rethinking their lives. The second thing is home and family have become absolutely cardinal to people. It’s much more important than it was before. Then the feeling of security and being in familiar surroundings and so on, the feeling of safety has become much more important. And then obviously, you know, to Myles’ point about people moving from the Northeast, this has– it’s simply accelerated. It started two years ago, and it’s certainly accelerating at this point.

JEN ROGERS: Jules Trump down there in Acqualina, thank you so much for giving us a little insight into your business, as we talk about people moving from the Northeast. It does look nice down there right now.

JEN ROGERS: I am looking at the cases, though, and that makes me a little nervous, but you’ve got a pretty shot there.

JEN ROGERS: But Jules Trump, great to get a chance to talk with you.

JULES TRUMP: Thank you very much. Thanks. Thanks, Jen. Thanks, Myles.

JEN ROGERS: So Myles, what have we learned here? I think that real estate, like every other industry, is seeing great changes–

JEN ROGERS: –and there’s still a lot of questions left out there.

MYLES UDLAND: Yeah, I think what’s interesting, thinking about it as a millennial– we can only be ourselves– I think the parts of the market that are attractive to myself and my peers, apparently that’s where all the demand is. So I think a challenged generation once again finds challenges as they think about real estate and their next steps.

JEN ROGERS: Always woe is me with the–

MYLES UDLAND: I’m just saying, we had someone say, starter homes in this area, like, there’s so much demand for this. And I feel like I was thinking about leaving the city, and oh, everyone’s thinking about it at the same time, too. So there you go.

JEN ROGERS: Have a great weekend, everybody. Thanks so much for watching. We’ll see you on Monday.