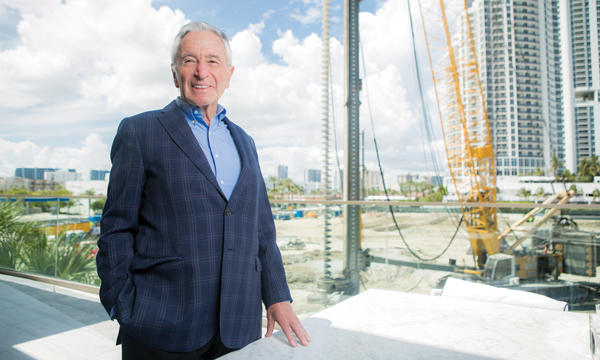 It’s quite a time to be a Trump. Though this 74-year-old developer is no relation to the current occupant of the White House, Jules Trump has delivered his own set of glitzy projects, like Williams Island, Acqualina Resort & Spa and the Mansions at Acqualina. And the South African-born Trump also opts to work with family, having built all of his projects in partnerships with brother Eddie.

Despite a general market slowdown in condo sales, units are moving at Trump’s latest project, the Estates at Acqualina in Sunny Isles Beach, which had its groundbreaking in the spring. The 49-story south tower, with 154 condos, is currently more than 60 percent presold, according to Trump. Prices range from $4 million to $10 million, plus two penthouses priced at $32 million and $38 million. Construction is expected to be completed by the end of 2020. The north tower, with 51 stories and 93 units, will come later.

TRD spoke to Trump inside the project’s sales center. The interview has been edited and condensed for space.

Where did you grow up? What was your childhood like? I was born in South Africa, and our parents had a retail store. Growing up, the retail store was the focus of our lives, so we grew up serving customers from an early age. I started working at 7 years old. It was a clothing store — shmatas.

Why did you eventually emigrate to the United States? We didn’t like the regime of South Africa at the time — the apartheid regime. We felt the United States was the great country of opportunity, so we decided to emigrate here, which we did in 1974. Our whole family came over: my brother, my parents, we had one child at the time, my wife and I.

Where did you go and what did you do? The first thing we did was acquire a retail business in New York — a chain of 140 retail men’s stores selling suits, called Bond. It had great real estate. In that famous picture of the sailor kissing the girl, our [Times Square] store was very prominent in the background, so it was kind of an iconic store in New York at the time.

How did your first development — Williams Island — come about? We came down for a vacation to Florida, and somebody showed us what was going on in terms of the various developments at that time. We felt that if we could bring a touch of great customer service to the developments that were happening, we could do something special. We put word out that we were looking for real estate to do something, and within two or three months somebody responded and told us of the availability of Williams Island, which at that time was in foreclosure. We were able to buy it, and over the years we developed something I am very proud of. It was 1980 or 1979 that we bought it, and we developed it over 15 years.

You’ve always worked with your brother. How has that worked out? Do you divide up responsibilities? Is one of you the boss? We’ve been very fortunate. We are both equals, and we do different things at different times. He is very good at a lot of things — very, very smart and great with people and so on. We will each take something at a different point in time and deal with it. There’s no formal division. We’ve been partners in everything we ever did since our first business ventures, and we really did start doing business-related things at a very early age. We were 6, 7, 8 years old.

Do you feel it’s hard at this time in the market to be selling luxury condos? We’ve lost certain key markets — Canada, Russia and parts of South America that were very strong, let’s say, four or five years ago, are no longer strong. What we’ve found is the American [buyer] market has become super strong. Our market is the young families, very wealthy people in their 40s. That’s why we have tons of facilities for children, whether it’s the indoor bowling, ice skating and other unusual activities.

What have been some of the bumps along the road?There have been times where some of the sales markets for condominiums haven’t performed as we would have liked and there were slowdowns, and we have looked for other markets. For instance, now, the Brazilian and the other markets have slowed, so our focus is heavily on the American markets, and we are getting good results from that.

Where do you see the condo market going in the next couple of years? The foreign markets are obviously very unpredictable. A lot of the markets that were strong once depended on the price of oil. If oil comes back to $100 [a barrel], all of the sudden you will see a different distribution of world wealth. For now, as long as prices are either lower or unstable, I don’t see a huge change in the foreign markets. But I do see prosperity in the United States. It seems to be at the high end. Tremendous prosperity. And so that is going to be our focus. But it’s very hard to forecast these macro events because so many unpredictable things happen.

What’s the most extravagant thing you have ever purchased? The land for the Estates at Acqualina was pretty extravagant. It was purchased over a long time; it was somewhere between $100 million and $200 million. We live well and quite a lot of our money goes to philanthropy, and we have other projects in Israel and they are very important to us. We don’t spend a lot personally on clothes and things.

What do you say when people think that you’re related to Donald Trump? I assure them that I am not. People joke about it more than anything else. There was a time people would be asking, “Are you, are you, are you?” It’s happening less so now. People just sort of joke about it, like going through customs or something like that, they’ll say, “Hey, here’s another Trump.” It’s OK. The name has served us well over the years.