Even by the standards of eclectic Paris bookstores, the personal library in the back of Studio 7L is immense, about 80,000 volumes. The breadth of the collection offers a window into the roving mind of its proprietor, Karl Lagerfeld, who sits at the head of a table in an immaculate Dior Homme suit. Around him are just a fraction of the more than 250,000 books in his possession, scattered all over his homes.

Like all collectors, Lagerfeld has a zeal to acquire that knows no limits—the only satisfaction is the chase. In his case, what he craves is not a particular object—or not just—but its contents. “I get every catalog. I look at every magazine. I am the most informed person in the world,” he says, smiling and sipping from a glass of Château d’Yquem. “I don’t do the internet. I like print—on paper.”

Lagerfeld is allergic to nostalgia, quick to move on to the next job, the next collection, the next muse. When he meets with T&C, he is preparing for a whirlwind year: He had just shown his Fall 2018 line-up for Chanel, and was at work on an elaborate cruise presentation for the house that would be delivered by ocean liner to the Grand Palais.

That collection would then serve as the linchpin of Peter Marino’s renovated boutique on 57th street, which re-opened late fall right before Lagerfeld staged the annual Métiers d’Art production, this time at the Metropolitan Museum of Art. (In December, too, Netflix premiered a new documentary, Seven Days Out, chronicling the making of Chanel’s spring couture show.)

It wasn’t the only item on Lagerfeld’s agenda, however. Lately, in addition to overseeing Chanel, Fendi, and his own label, he has professionally taken up a lifelong passion: interior design. He has completed a Toronto condo—”Every apartment was sold,” he boasts—and upcoming are a pair of sleek oceanfront-lobbies at the Estates at Acqualina, a $1.6 billion residential complex in the Sunny Isles Beach area of Miami, his first such undertaking in the United States.

At this stage in his life, Lagerfeld doesn’t need to take on any more work. He accepted the Miami assignment because he could. “I don’t have to. I do [it] for fun. I have more than a decent job,” he says with the nonchalance of a man with nothing left to prove and the freedom to indulge only in distractions that stimulate him. 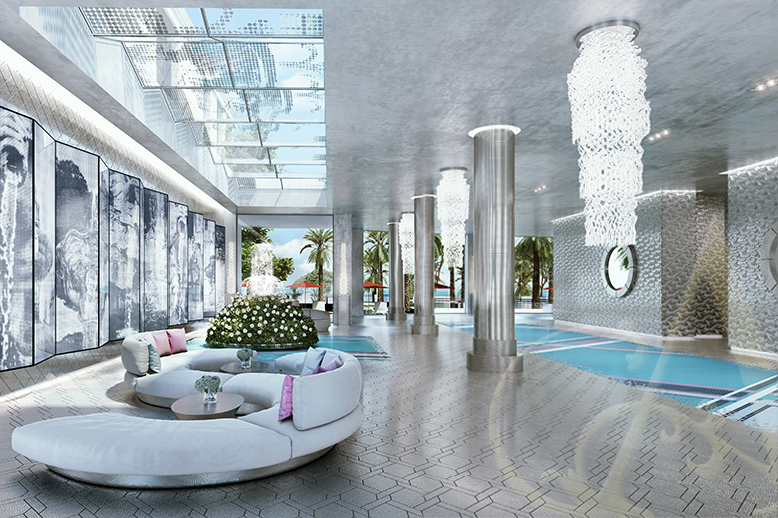 He has no shortage of offers to collaborate, and he usually accepts these purely on a gut instinct. “If I don’t like the people, I say, ‘Thank you very much, I’m busy,'” he says. “I refuse a lot. I only take what I really like.” As it so happened, Lagerfeld was charmed by the developers of the Estates, the Trump Group (no relation to the 45th president), and Miami‘s ascendant profile among starchitects—Norman Foster, Rem Koolhaas, and the late Zaha Hadid (a Lagerfeld friend) all have new residential buildings in the area.

“The project was beautiful and they were very extremely nice. That’s all I need,” Lagerfeld says. While construction of the 254-residence development won’t be finished until 2020—in October, the developers announced a second tower that will also feature common areas by the designer—Lagerfeld’s sketches for the lobby imagine an impressive entrance hall in metallic shades and accents, flanked by photographs of his own making and gleaming columns and chandeliers. All serve to frame a gorgeous view of palm trees and crashing waves.

“I don’t want to work on places that I wouldn’t go to. I have enough places I never go to,” Lagerfeld says.

The commission, and the earlier Toronto building, came about through the consultancy Leitzes & Co., which pairs luxury brands with artists and designers, and was so successful that it is to become the centerpiece of a new venture for the prolific couturier. Through Karl Lagerfeld Hospitality, a joint licensing effort with the Amsterdam-based Brandmark Collective BV, the designer will monetize a skill he has been honing in his personal life for decades by crafting interiors for hotels, residential towers, restaurants, and even casinos.

“Fashion is one thing, but I approach interior design as if I’m making it for myself,” he says.

Lagerfeld has always been obsessed with design, and over the years he’s become infatuated with certain periods and styles, only to then abandon them unceremoniously. His penthouse in Monte Carlo was a monument to Memphis style, long before it became the rage it is today; he completed it in 1981, moved out four years later and famously sold the entire collection at auction in 1991. “He was a kind of genius and the nicest man in the world,” he says referring to Ettore Sottsass, the founder of the Memphis Group.

Later, Lagerfeld’s 18th-century phase ended in 2000 with a $21.7 million auction. “Now it’s coming back as vintage, but then I was tired of it,” he says. “I get easily tired.” For the record, he’s now scooping up pieces for his villa in the south of France by T.H. Robsjohn-Gibbings, the British designer who was worshipped for his recreation of ancient Greek furnishings and his homes for the likes of Doris Duke and Alfred A. Knopf. “I have a dining room he did for the Rockefellers that I bought,” Lagerfeld says, beaming.

Around the time of that auction, Lagerfeld declared, “Possessions are beginning to suffocate me.” But through it all, the exception to this credo have been his books. Those are hard to shake. His apartment on Quai Voltaire, the one brimming with Martin Szekely and Marc Newson novelties, is also a maze of prose.

“You can hardly walk,” he gushes. “I was never as happy in a place.”

It’s clear that Lagerfeld feels most at peace amid his literary Babel, floating in antique pillows above a labyrinth only he understands, sketching with Choupette by his side.

“She’s the inspiration for everything,” he says.